“The sixteen-year-old, who breaks out of his family on his birthday and crashes his father’s car, is a figure of Markus Imhoof’s constant concern with the figure of the father, be it physically or personified in the figures of the organized Society, the prescriptive state, the dictating group.

For the generation that engineered the revolt in 1969, “Happy Birthay” is still enlightening, among other films on the subject. And with some astonishment you can perceive – for example, in the way the students in the gymnastics set in trot, as the students are twirled at the Kneiptisch – that Markus Imhoof  found early the right situations, the coherent images that reveal the rituals of power for this uprising against the well-ordered life, 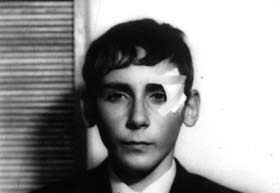 Born 1951 in Mägenwil. As a 16-year-old leading actor in Markus Imhoof’s film “Happy Birthday”, attended photo class of the Zurich School of Applied Arts, followed by two years as a lecturer in photography at the British Bath Academy of Art. Between 1978 and 1984 he directed a number of documentaries and short films as a director. Several awards for commercial and industrial films. Lives in London since 1998.