Incessant snowdrifts cut a village off the environment before tourists and a group of soldiers with their sick horses can escape from the valley. The first avalanche has covered roads and railway tracks. Men and cattle are crowded in the few still safe houses and in the too small hotel.

Manfred and Jutta who have spent their vacation here with their seven-year old have to give up their child’s bedroom for evacuees. In the tension of this first night in which they cannot escape each other, reproaches burst out between them that have not been addressed in a long time. Exasperated, Manfred goes so far as to provoke Jutta to an affair with another man and gets alarmed because she does not resist more vigorously. Hurt and curious she starts getting involved with a French-speaking soldier. 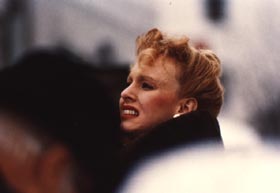 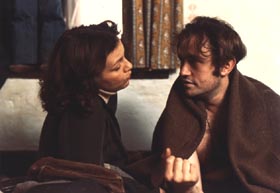 Die Angst des Tormanns beim Elfmeter (The Fear of the Goalie at The Eleven meters), Wenders/Handke

Si c’etait à refaire (If it Could be Re-done), Claude Lelouche

This is one of the most independent and difficult but also one of the most substantial and technically advanced feature films made in Switzerland in the last years. After «Thaw» it should be a matter of fact that Imhoof is cut out for being one of the better film authors in our latitudes.

Markus Imhoof’s film did not originate in statistics. Behind the film stand personal experiences, this shows itself mainly in the care with which the figures are treated.

It’s not about telling a married-couple story in the well-known psychological-treatment style. It’s rather staged existential uncertainty, «undammable» and irrevocable, breaking open in spatial and emotional tightness. Imhoof has gone to work about the phenomenon of the tightness subtly, precisely and not without having suffered from experiencing it himself.

Markus Imhoof has created a very personal and with regards to style consequently held film which is set in scene in many ways against the viewing habits of many spectators who have become insensible by TV and commercial films. The film is composed of fragments, indications, hints and circumstantial evidence. It expects a great readiness of the spectators to actively care about the happenings in the film, to read the pictures and to puzzle together the fragmentary picture of a marriage crisis to a whole by filling in own experiences.

Behold, «true» cinema, with a solidly carpentered scenario. Well-served by its actors, «Thaw» testifies the solid talent of a story teller in Imhoof.